Short History of Harbour of Patras

In the past, the Port of Patras has played an important role in the economic life of modern Greece from the first years of its independence. It was an important import and export center of the country.

Patras is a typical example of a Greek shipping commerce centre. A city characterised as a “city-port”, Patras reached its peak mainly thanks to the trade of raisins and generally its import and export trade. Its main export commodity was raisins. Ships arriving at the port of Patras were loading mainly wheat, oil and raisins transporting them to Trieste and to other Italian cities and from there, through land transport, to the markets of Northern Europe.

As years went by and Piraeus developed, traffic started to reduce.

In 1893 the Corinth Canal was opened and the Aegean Sea was connected with the Ionian. Consequently the distance at sea between Patras and Piraeus was reduced, since it was no longer necessary to circumnavigate the Peloponnese Peninsula.

The port contributed greatly to overseas immigration, especially during the end of the 19th and the beginning of the 20th century. Up until the end of the 1960s, before the competition with airplanes became unequal, the main means of transportation for the immigrants were the ocean liners that often docked in Patras too. Up until 1907, when the first Greek oceangoing passenger line was founded, the Greek immigration wave towards America was transported by foreign steamship lines. Two of those companies whose ocean liners put in at Patras were the German company ‘Hambourg American Line’ and mainly the Austrian company ‘Austro Americana’, which par excellence transported Greek immigrants to America until 1907.

In the first years after World War II the port was in decline, up until 30 years ago, when ferry boats started to connect Greece with Italy. More than 40 F/Bs are used at this line during the summer season.

The first indications of maritime and coastal activities during the prehistoric ages have been located in the area of Agia, which functioned as a seaport for the townlet Aegialos. Aegialos was located in Amygdalia of Bounteni. However, it is from this rudimentary harbour of Agia that the ships of the Ion Aegialeans sailed towards Aegio, where they were to meet the Mycenean fleet of the Achaians in order to jointly campaign against Troy.

After Patras was founded in the 11th century BC at a location closer to the sea now – in relation to the prehistoric location of the townlet Aegialos – the city’s harbour was organized at its eastern coastal area, where later the temple of goddess Demetra was erected, protector of the ‘Achaian Confederacy’. Today, in place of the ancient temple, rises the famous church of Saint Andreas, who has been proclaimed the patron Saint of Patras.

At this location the harbour existed until the end of the 13th century, though it received several adjustments for the protection of ships and transit trade from pirates and various invaders.

During the occupation by the Franks in the 13th century the Harbour of Patras was moved to the northern side of the City, to the point where ‘Magna Ruga’ ended up (today Saint Nikolaos street), so that it lay in a beeline from the city’s Castle and was under its protections.

The liberation from the Turks in 1828 brought on the need for the citizens of Patras to turn their interest to the sea once more. This action aimed to bring them in touch with the European culture, but also to make them feel the attraction their ancestors of the archaic times felt towards the sea. However, due to the transfer of the coastal activities to the north side of the city, ever since the time of the occupation by the Franks, the revival of the worship of the sea by the ancient inhabitants of Patras seemed rather impossible, and thus, little by little the citizens of Patras of the 19th century turned the coastal areas into places of entertainment and recreation.

However, even after its liberation, Patras, located on the commercial axis leading the ports of Western Europe, was fast to find her pace as regards its activities in transit trade.

The first activities after the liberation began during the end of October 1828. Until then the coast of Patras was deserted, since no town planning had yet begun. The first offhand spaces, housed sheds for entertainment and mess started to be ‘set up’, mainly by the French. In some cases these facilities functioned as improvised theatres offering entertainment to the French soldiers.

The development of the port of Patras from the 18th century to the first decades of the 19th century was determined by local and international parameters alike. Among these, a very important one is its geographical position in a natural space which, including west and south-eastern Peloponnese, Central Greece and the Ionian Islands, concluded in a multitude of bays, natural harbours and coves and had an opening to the Ionian and the Adriatic. During the Greek Revolution period, Patras is mentioned as the main commercial centre of Peloponnese and as a transport hub to Trieste, Ancona, Leghorn and Marseilles. Thus, apart for the greatest port of the area it also becomes the most important urban centre in Western Greece.

By mid-19th century, Patras was established as the first raisin export port and generally as a main export and import centre with the West. However, the opening of the Isthmus of Corinth (1893) brought about a heavy blow on local commerce.

The modern era of the port starts in 1836, with the first actions for the artificial port construction, which was decided by the Municipal Council of the city. In 1838, the first part of the (wooden) pier was constructed, 35 m. long (no lighting source). Two years later, it was extended by 20 m, however without meeting the needs of navigation. Despite the recommendations of the time on the necessity to build a Lighthouse, this will happen 17 years later (1858). Port works continued in the 1850′s (jetty, dock), but were ineffective due to the small depth of the sea that did not allow the approach of big sail boats. 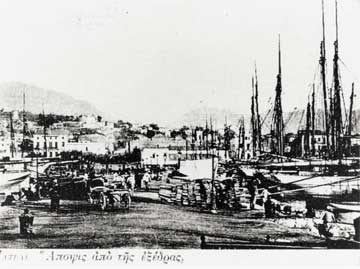 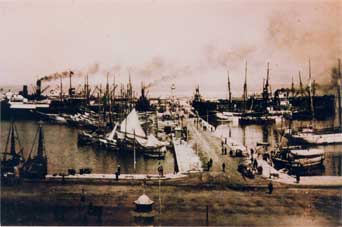 Construction of the Harbour

In 1880 the designing of the necessary harbour works was assigned to French engineers and after many problems the harbour works were completed in 1889. The same year a new contract for the construction of jagged wharfs was signed, but there works were eventually not performed. Therefore the port remained without jagged wharfs and with many problems until 1927 when the port issue was brought up again.

In 1930 a technical firm was assigned with the execution of the following harbour works: port dig until 9,5m, jagged wharfs of 1400m length and 80m width, widening of the Kalavryton pier and widening of the Astigos pier. The harbour works continued during the decade of 1930 and were interrupted by the beginning of World War II.

Not until 1956 the Port issue was brought up again with the extension of the port towards North. Extension works and modernization works continued up until today, with emphasis given to the infrastructure needed for providing services to ferryboats.

The importance and role of the Port were strengthened to a great extent the past 10 years and now it is one of the main gates of Greece from and towards Western Europe, after the problems arised due to the terrestrial axes through the states of former Yugoslavia.